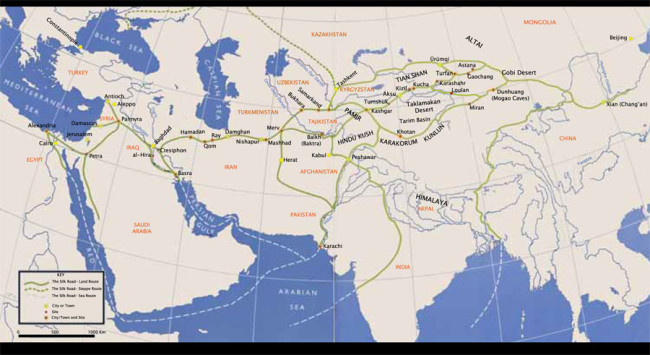 When you Google for “The Silk Road” today, you find a lot more search results for the drugs-and-guns site than for the historically significant network of travel routes between China, the middle east and ancient Rome. Yet, for centuries this “international commercial highway” was the source of valuable goods, spices, gems and China’s silks for those who had the money to pay.

When the Great Mongol State (the largest empire in history from 1206 to 1368) began to break down, the anarchic conditions in the middle east made it virtually impossible to travel the Silk Road by land. There was a sea route from China to the Near East, but in 1453, The Turks captured Constantinople and took control of the sea routes in the Black Sea. The Turks also controlled Egypt at this time and created an expensive hardship on both land and sea routes to and within that region as well.

These bottlenecks to trade began to take its toll on the price of goods for the ruling classes in Europe. Gold and silver coffers were being severely drained. As we shall see, viewed from the vantage point of the future, this strain on the wealthy acted as a catalyst to the Age of Discovery.

In the meantime, the little kingdom of Portugal attained its independence from Castile with the help of a contingent of English archers in 1385. Twenty-six years later a treaty was signed.

In the next episode, you will see how the events of this revolution created the life of a significant player in Magellan’s Geodrama, Prince Henry the Navigator.

These articles are small essays from the reading of “Magellan” by Tim Joyner.

The Magellan Project is a seafaring adventure that will retrace the 3-year route of Magellan’s circumnavigation of the world – in time for the 500 year anniversary.

Ongoing documentation, in various media, will be transmitted to the public as it happens. Outreach and cultural research are being planned for the ports o’ call. Collected materials will be compiled to produce a documentary, and all materials will be available to educators and researchers.

This is an ambitious project, and we need your help. See how you can JOIN THE ADVENTURE.

Map of Portugal (Citation)
By Gabagool (Own work) [CC BY 3.0 (http://creativecommons.org/licenses/by/3.0)], via Wikimedia Commons

This site uses Akismet to reduce spam. Learn how your comment data is processed.